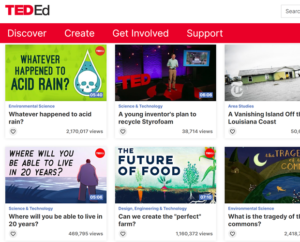 Why did I choose this video?

Because I want to learn more about history. Timur is called History vs. Tamerlane in the title of the video. At first, i was heartily interested in why they called Timur like history vs. So I clicked into this video to find out. 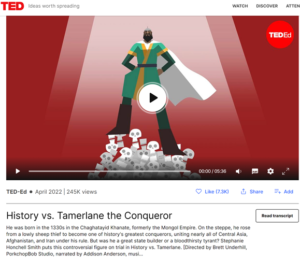 Is Timur a great state builder or a bloodthirsty tyrant?

Timur was born in 1330s in the Chaghatayid Khanate formerly the Mongol Empire in Central Asia. He rose from a lowly sheep thief to become one of history’s greatest conquerors, uniting nearly all of central Asia, Afghanistan, and Iran under his rule. But was he a great state builder or a bloodthirsty tyrant? Today we will figure out the truth.

Timur’s family was minor nobility, yet Timur also prove his worth through faring and horsemanship. His uncle and brother-in-law are high-ranking officials. I thought Timur was a strategist and an intelligent person. Because he was trying to remove his corrupt uncle and brother-in-law in order to save the country. So he defected to a rival khan and went to battled against his brother-in-law. Finally, his brother was assassinated and Timur seized power. Afterward, he managed to reunite most of the khanate’s territories and put an end to decades of bloody infighting.

Many people thought that Timur was a  bloodthirsty tyrant , but i did not think so. It was not true that he killed seventeen million people, actually it was 1 million. Timur’s official biographies deliberately exaggerated the number of the deaths to deter rebellions. Cause of this was the propaganda , as we all known that propaganda could not  totally reliable. On the other hands , he rebuilt irrigation canals to support agriculture and regularly distributed food to the poor. At the same time, he also revitalized the Silk Road. It became thriving commercial hubs under his rule.

In my opinion , I think Timur is not totally a bloodthirsty tyrant. Although many people were dead during the war, he really wants to make the country better and let the poor live happily. He greatly improved the economy and culture as well.

Any new English words did you learn from this video? Please choose 5 words and use them to write a sentence.

Lowly: She was not ashamed of his lowly origins.

Strategist: Jane is a brilliant strategist, and she rarely wastes time or effort.

Corrupt: It is sad to see a man so corrupted by the desire for money and power.

Decades: Air traffic has increased 30% in the last decade.

Deliberately=consciously and intentionally : I did not do it deliberately; it was an accident.

Latest posts by YouYou (see all)